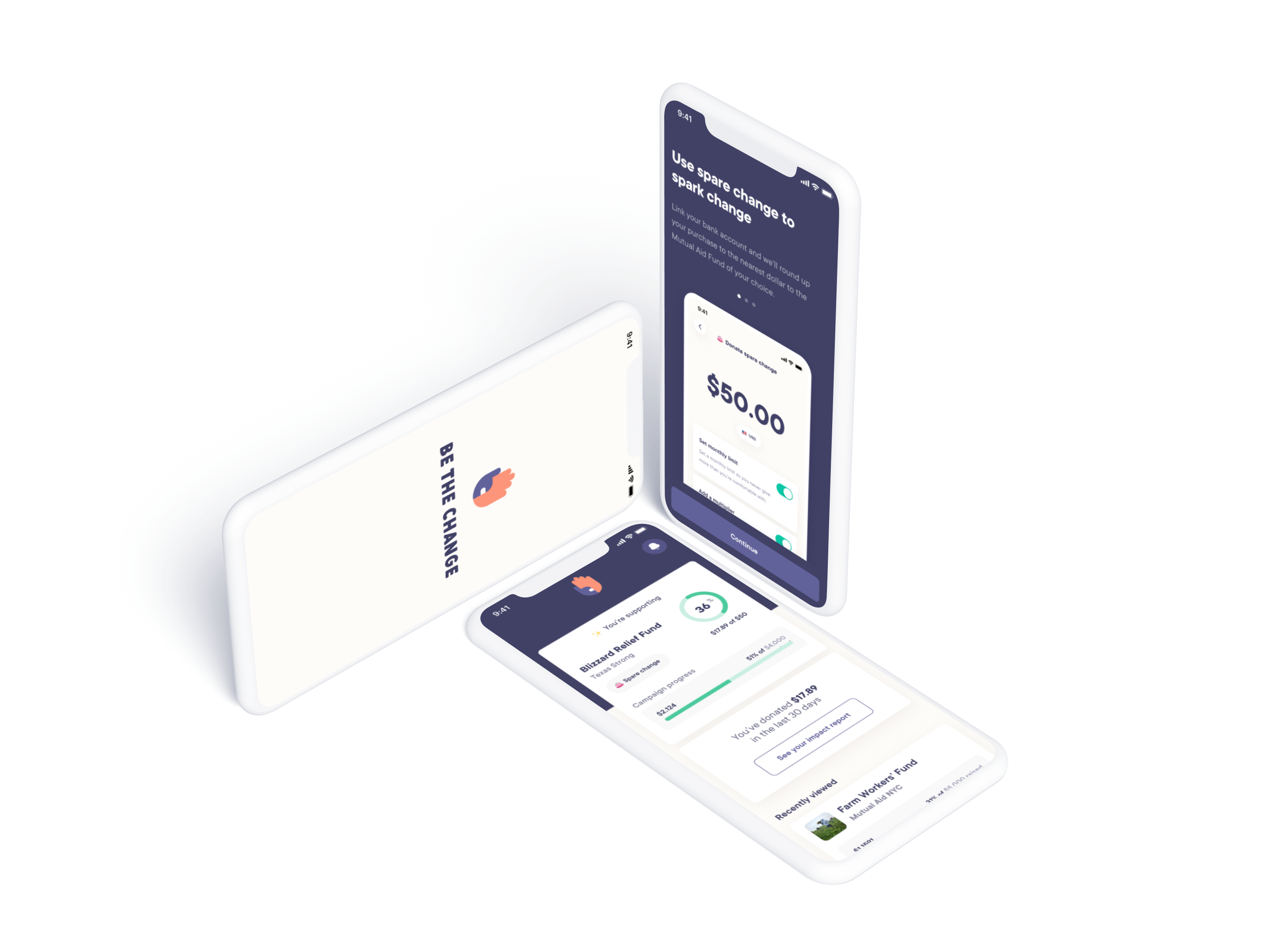 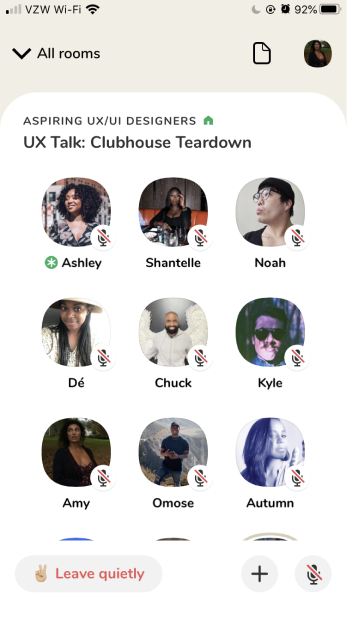 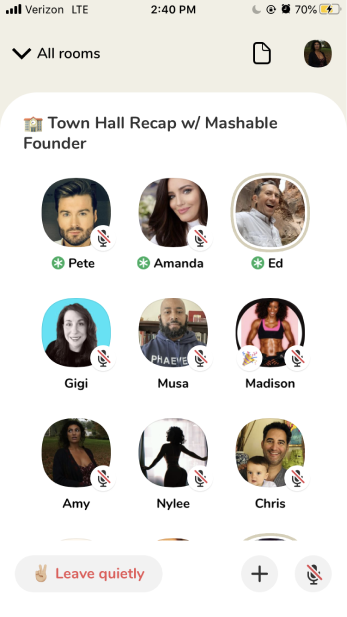 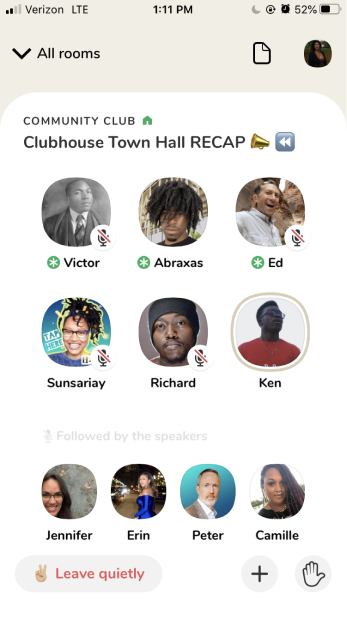 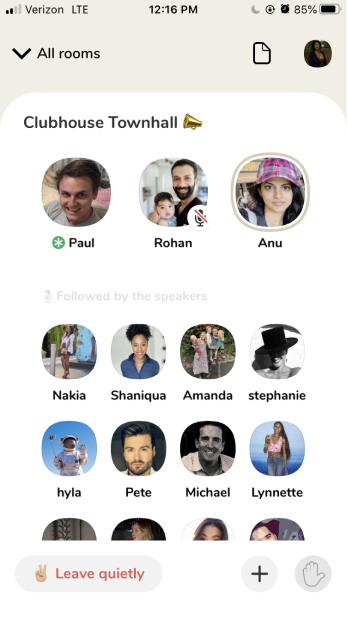 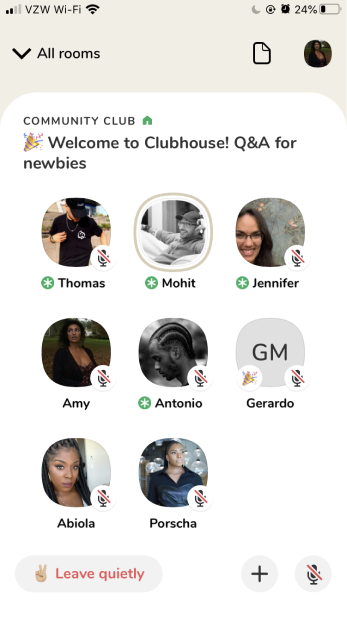 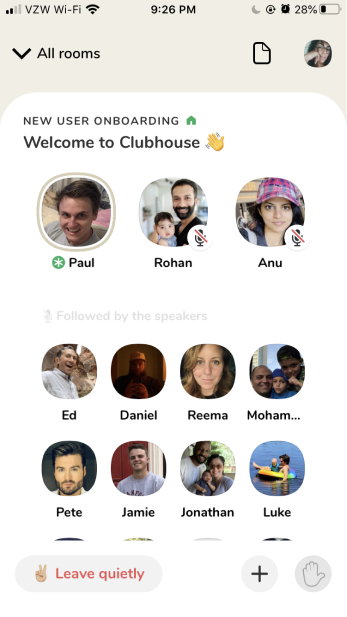 Disheartened by the exasperated state of crowdfunding campaigns, I aimed to create a platform that reframed donating to charity as not only an uplifting act but also a transparent and actionable process by focusing on grassroots Mutual Aid Funds and campaign-driven contributions.

A full working prototype that will be developed by a team of engineers at an upcoming hackathon.

I'm a firm advocate for using design as a tool for social impact, and my design work (like myself) are never ethically neutral. I've been fascinated by the concept of "micro money" for quite some time, and noticed that most products leveraging spare change fin-tech (rounding up purchases to the nearest dollar) are focused on investing. Seeing a gap in the market for this emerging tech and inspired by my personal mission of using tech for good, I aimed to create a platform that allows users micro-donate their spare change to charitable organizations.

A few months prior to this project, I experimented with a similar concept project at Hack to the Future, where my team placed as a finalist in the "Best User Experience" category. For my final project as part of my UX Bootcamp, I wanted to challenge myself further by not only refining this idea but also assembling a team of designers and developers to bring it to life.

The high-level goal of this project was:

Business Model: A Blue Ocean Strategy
A survey of the current charitable donation landscape revealed there was considerable room for innovation. I found that charitable organization platforms fall into three main categories:

• Siloed: each individual organization has its own web or mobile platform

• Congregated: a large (read: overwhelming) resource of many organizations with high-level filter and search functionality

• Crowdfunded: most often used as a buoy for systemic state failures

Moreover, of the few micro-donation platforms on the market, none were focused on mutual aid, nor were exceptionally effective at facilitating discoverability of organizations or conveying the impact donations on the platform were having.

By leveraging the power and impact of mutual aid organizations, the innovation and ease of micro-financing, and the simplicity of a service-fee-based revenue model, Be the Change is poised to be an empowering life-raft in a blue ocean of possibility in the charitable donation space. 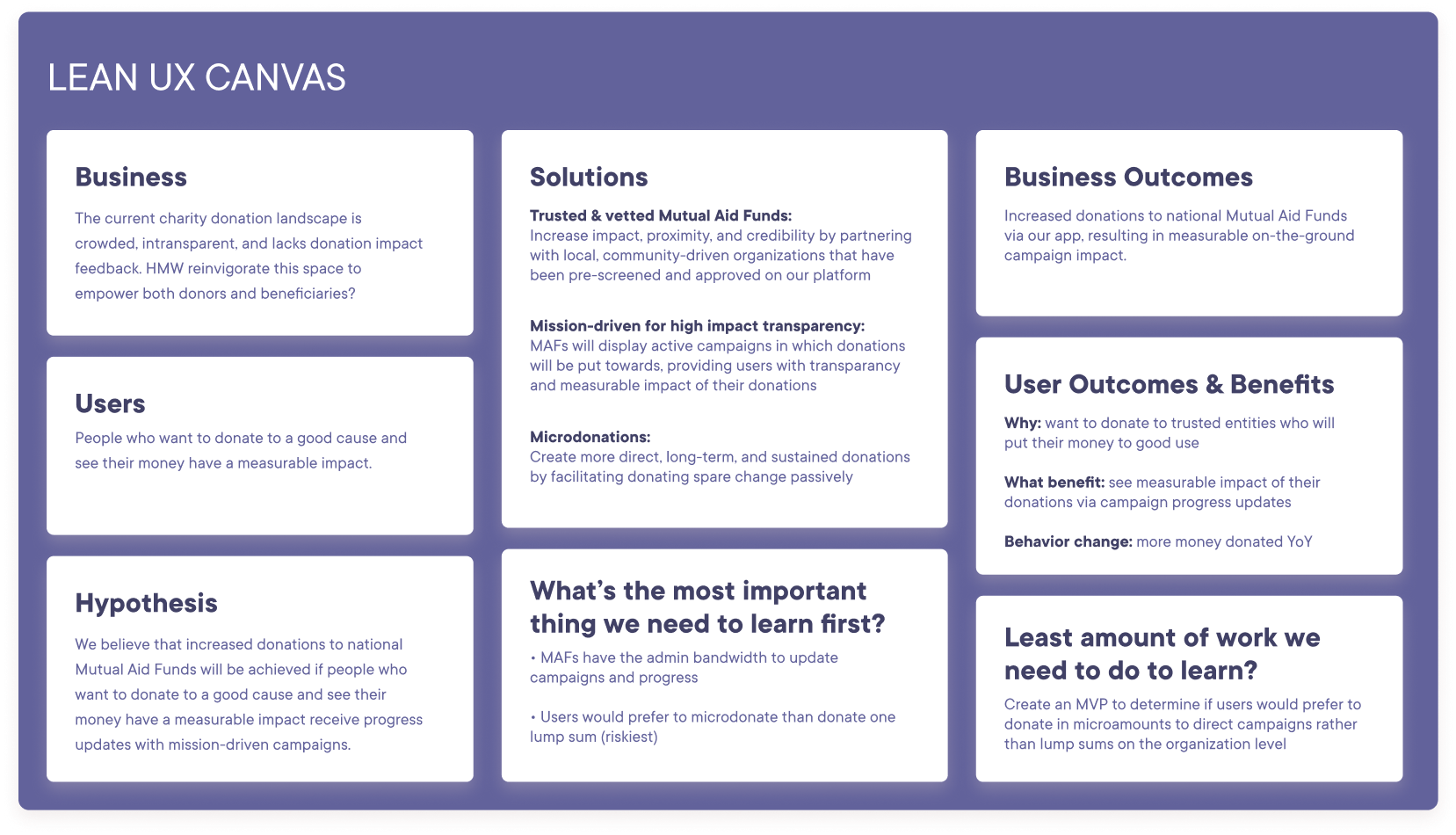 Why focus on Mutual Aid?

After brainstorming with my mentor, I intentionally decided to focus on Mutual Aid Funds for this platform. In systems of mutual aid, communities take on the responsibility for caring for one another, rather than forcing individuals to fend for themselves, or for government assistance, which has unfortunately proved to be an unsustainable lifeline in desperate times of need.

Rather than centralized organizations where one person is giving to another (effectively creating yet another dependent relationship negotiating access to material resources), mutual aid creates a symbiotic relationship, where all people offer material goods or assistance to one another. Mutual aid organizing is volunteer-run, transparent, and driven by the needs articulated by community members - all values my research found donors to charity highly regard.

Put simply, allies want to make a meaningful impact where it's needed most, and mutual aid organizations are a noble and mighty vehicle to drive such impact. Be the Change is the marriage of these harmonious truths.

The primary challenge of this project was how to define the parameters around how a user directs spare change towards an organization. Initially, there were three options I considered:
‍
• Allow the app the collect spare change from each transaction into a cumulative piggy bank that users could then allocate money from
‍
• Allow users to donate spare change on an ongoing basis to multiple organizations simultaneously, splitting up each spare change sum between the organizations
‍
• Make spare change donations a 1:1 transaction, only allowing for one sustained donation at a time

Ultimately, I made the decision (in the interest of simplicity and time constraints) to focus on the third option, designing a solution that facilitates sustained micro-donations to one organization at a time, with the additional option of making a direct donation of one lump sum when a prolonged micro-donation isn't the best choice for a user.

Another major consideration was reframing the context in which people donate to charity organizations, providing them with more information on what their money will be used for, and a clear way to visualize their impact.

In speaking to research participants about their donating habits, I was surprised to find the primary considerations for donors was:
‍
• Transparency: people wanted to know exactly where their donation dollars were going

• Making an impact: knowing their donation was having a measurable on-the-ground impact was top of mind

• Trust and credibility: feeling confidence in the organization was a major precursor to donating to that organization

Marrying design patterns from fin-tech apps and donation platforms, we created a simple, passive, and continuous way for people to support causes they care about and can be confident are making an impact through their contributions. 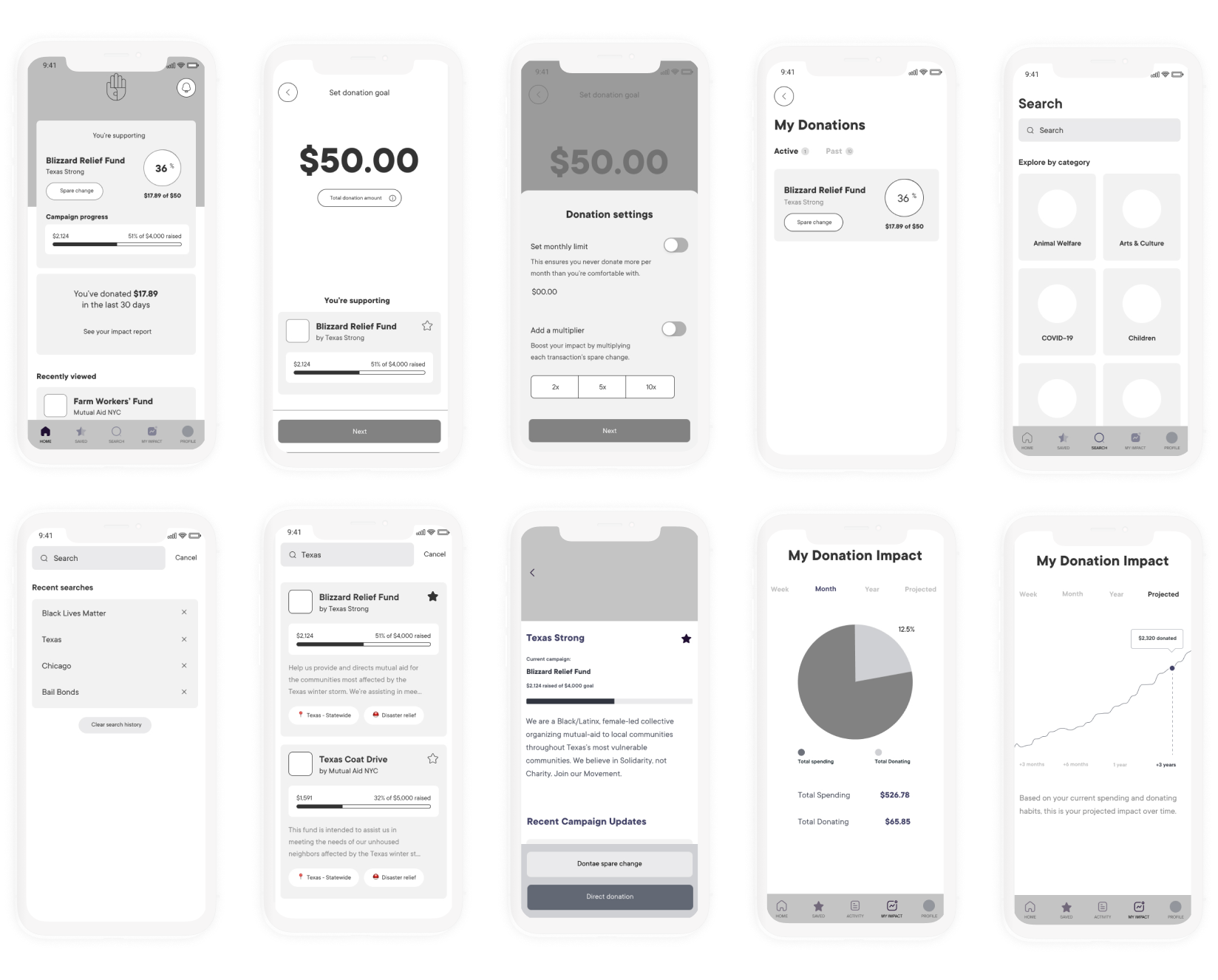 Users wanted to feel trust and credibility in where their donation dollars were going, and transparency in both the organization and how funds were being used was of top importance.

With this in mind, we designed our product with transparency at the forefront, making campaign updates a direct correspondence between organization and donor via notifications so users can know exactly where, how, and when their money is being put to good use.

We also included important information a user would need to establish credibility in an organization, including annual revenue and expenses.

Knowing donors wanted clear context on what on-the-ground efforts organizations were fundraising for, we designed our platform around campaigns rather than corporations.

By providing visibility on actionable efforts being taken by organizations, we could reduce (or remove entirely) the ambiguity that comes with donating on an organization level where the next steps following your donation are unknown.

With trust and credibility being central pillars of our product, we wanted to encourage charitable donations only as much as users didn't feel pressured to donate more than what they were comfortable with. We designed a few solutions to strike this balance:

Donation settings to allow for both conservative and more ambitious donation transactions, whether users want to set a cap on how much they donate monthly or amplify their donations with a multiplier.

Incentives to invite a friend onto the platform, contributing money to a cause they care about while simultaneously helping scale the platform.

We intentionally departed from the visual language of traditional banking and charity apps on the market. We wanted Be the Change to feel trustworthy, but also friendly - bringing a sense of lightness to the heavy content users may come across.

How effectively can users set up micro-donations?

After conducting my usability tests, the insights were twofold:

• The good news: the core value proposition of the app, as well its content, context, and discovery were both clear and attractive to users

• The not-so-good news: the user flow of donating spare change was unclear 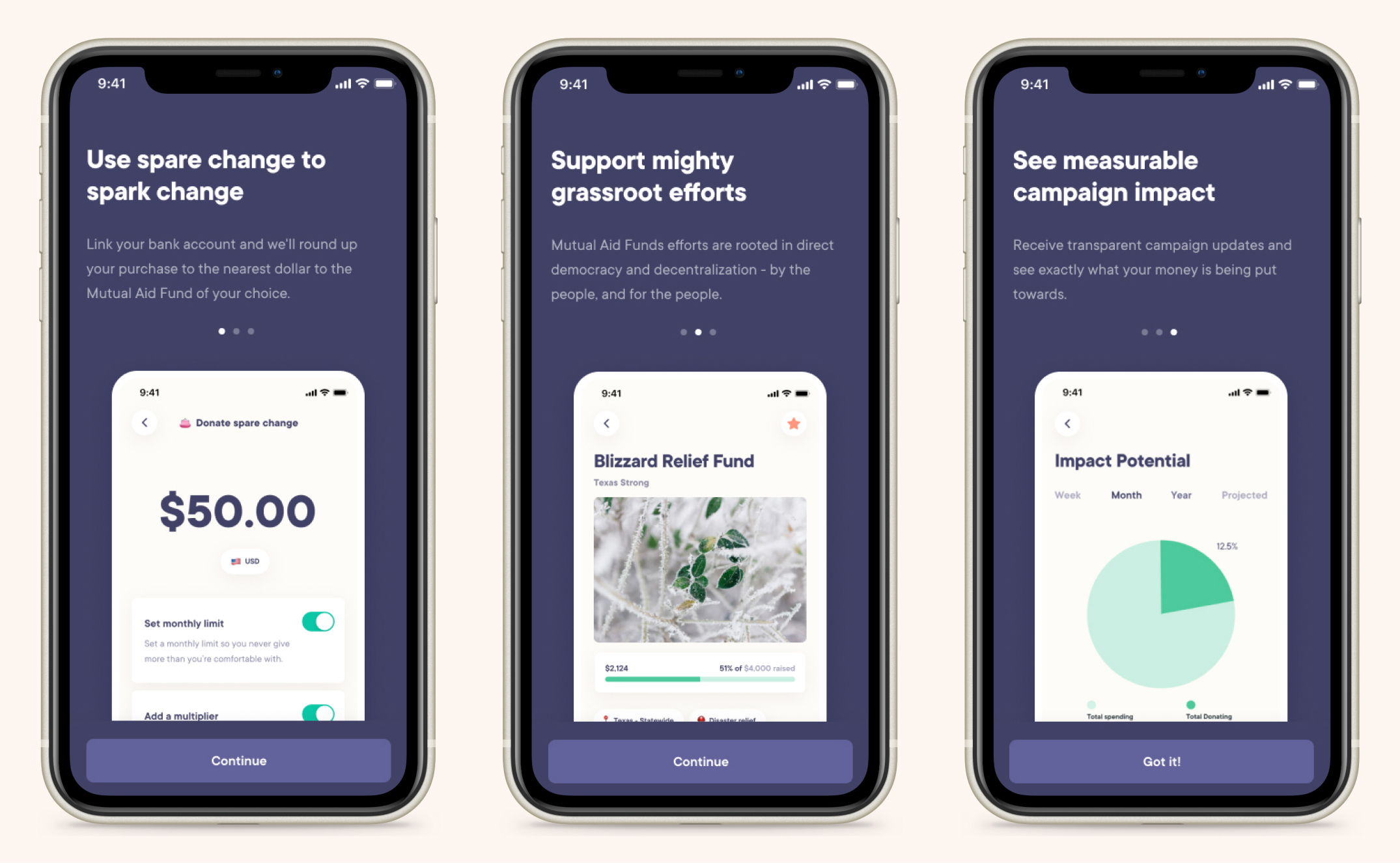 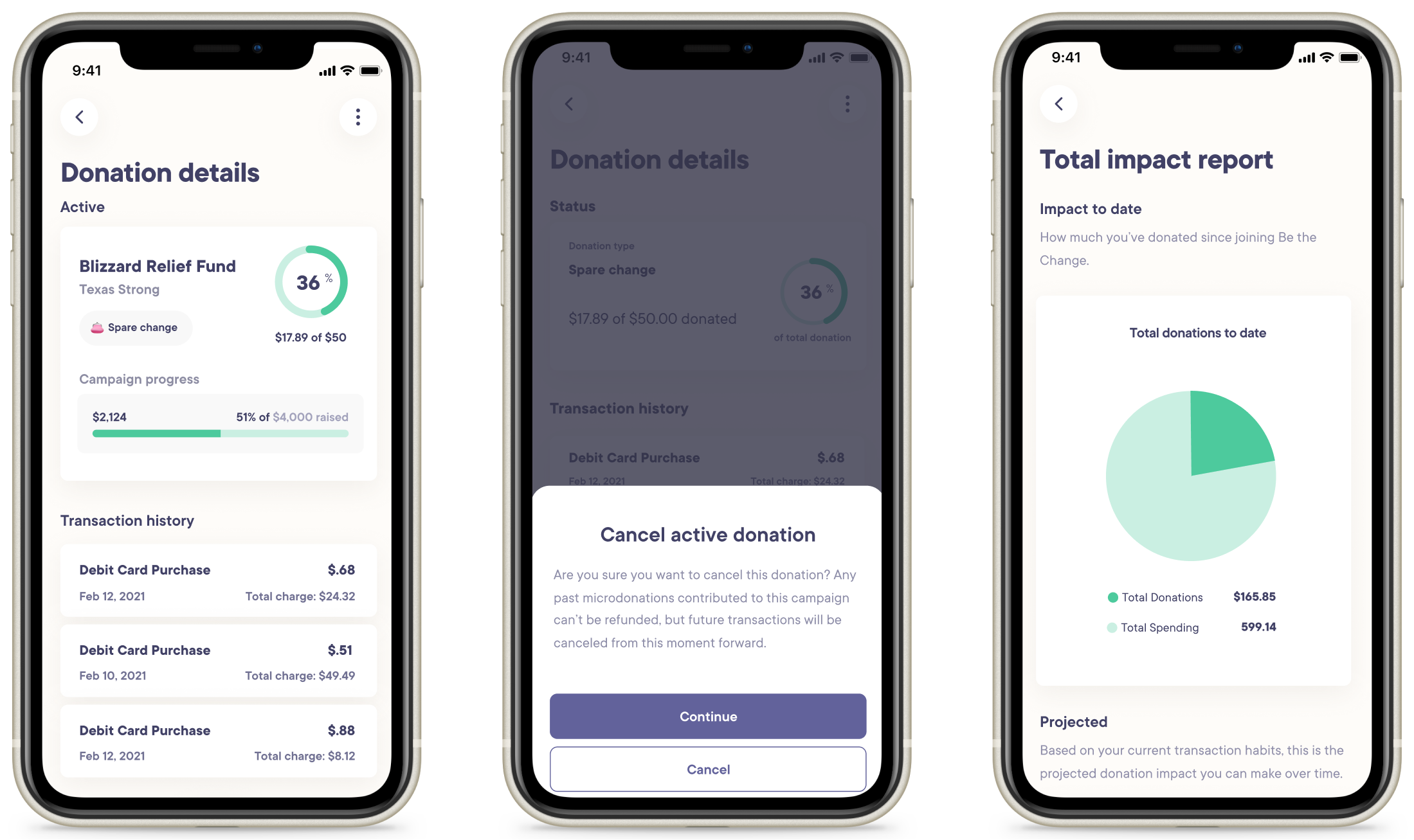 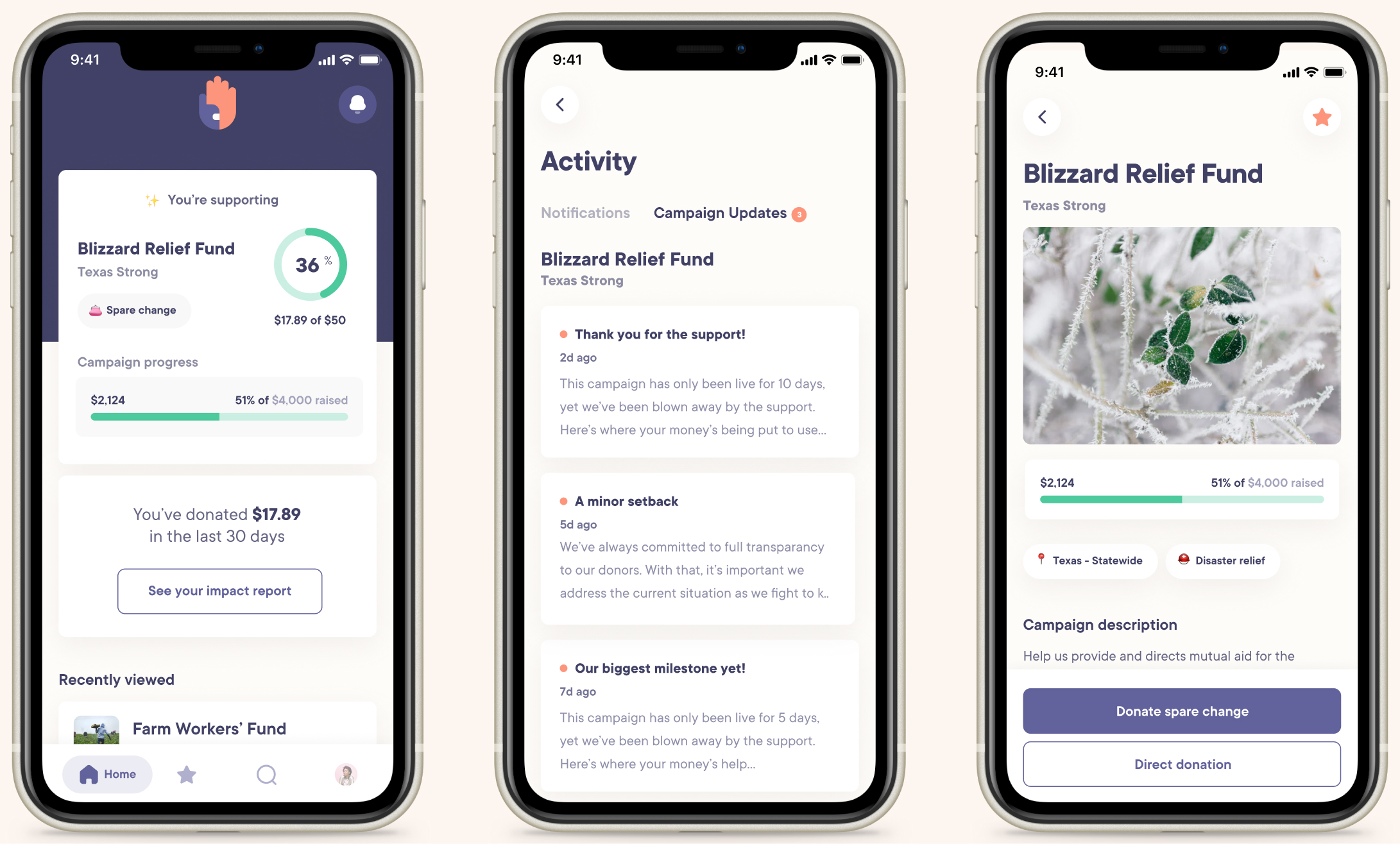 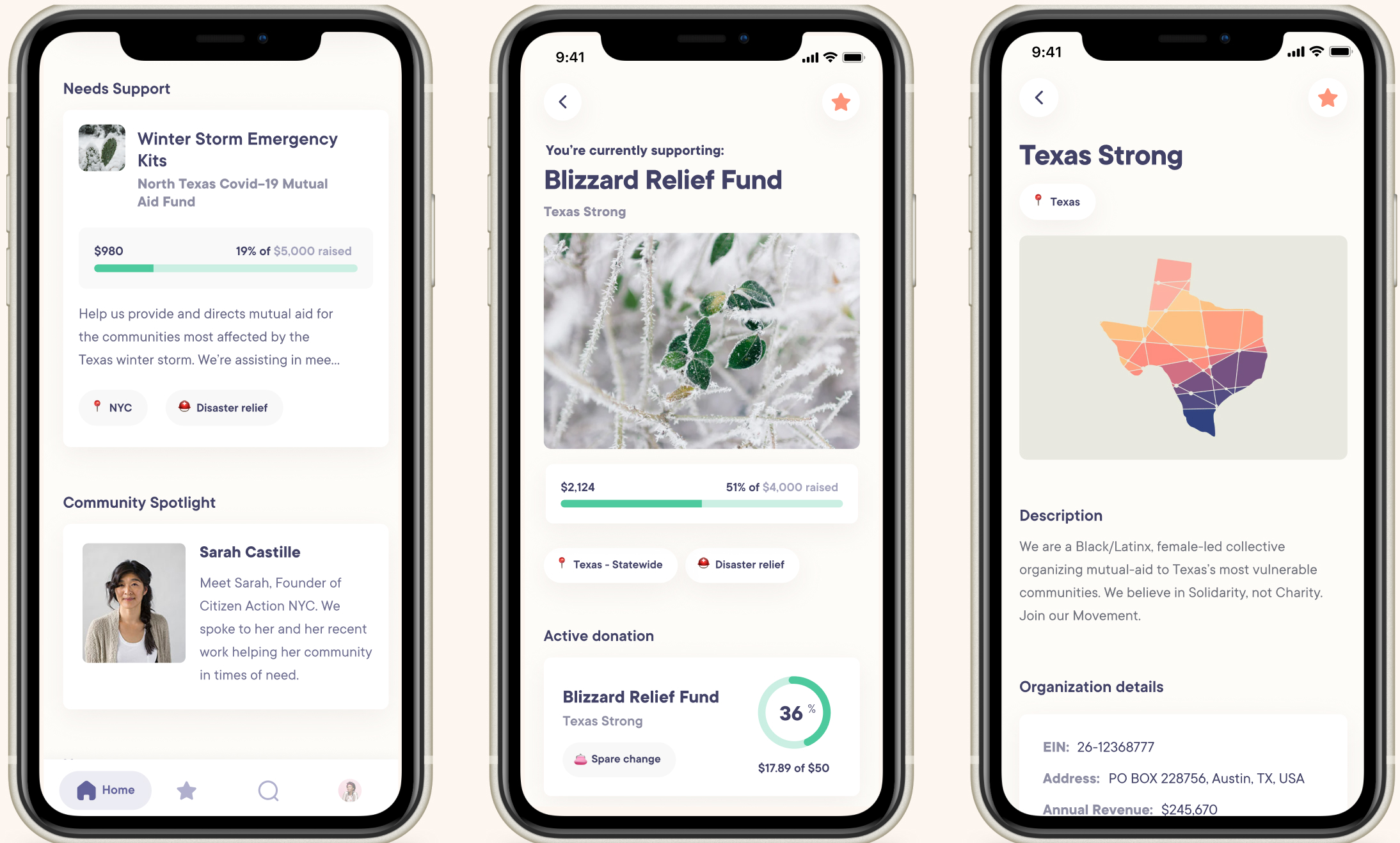 Lessons learned, and where we go from here

Be the Change started as a quiet aspiration - something I dreamed up amidst the chaos of the world and experimented within a safe environment before committing to building it out and bringing more people in. The result was a functional MVP that our small but mighty team can use to validate our product-market fit with users and present to investors if we choose to take it further.

Working under the guidance and mentorship of Anna has been the greatest source of pride in my UX learning journey, and formally partnering with her on this project - one that started as a modest idea of mine and grew into a truly collaborative effort rooted in social justice - is one of the greatest gifts this project has given me.

This project taught me the value of collaboration and working on a product team; I learned to be more organized with my documentation, meticulous with my handoff, and iterative with my design solutions while working with a senior designer.

The next steps for this project are to get it into the hands of more users for further validation, experiment with richer search functionality (such as by location and keyword ranking), and decide as a team if we want to bring it to market.

The guiding principles in my UX journey (and career) are collaboration over competition and courage over comfort. The project has shown me the power of both, and I hope it has for you, too.